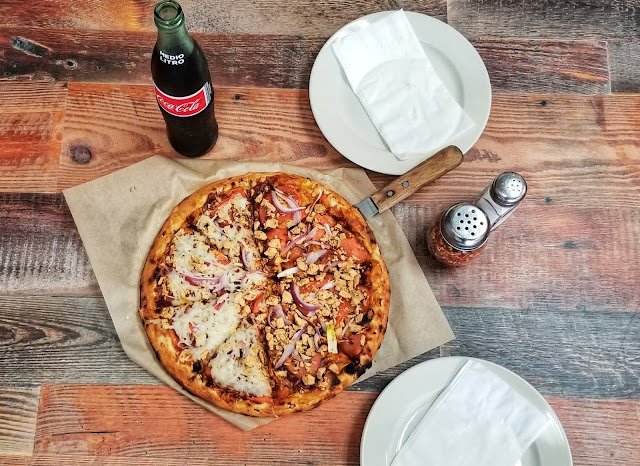 "Be the change you wish to see in the world", were the words written on the wall of this vegan spot. On our short visit to LA, we made a vegan food stop on our way out. I googled vegetarian spots as we were about to leave Anaheim, and a few that were nearby, and of interest came up. We were happy with the choice we made.

As we pulled up to Vegan Pizza, it was simple on the outside, but when you walk inside and see the menu and all the vegan options, nothing else mattered. On the menu they had a variety of gourmet pizza options, sides, pastas, drinks, as well as desserts. So many mouth watering options, and only two of us to grub. Also, the walls and tables were tastefully put together. 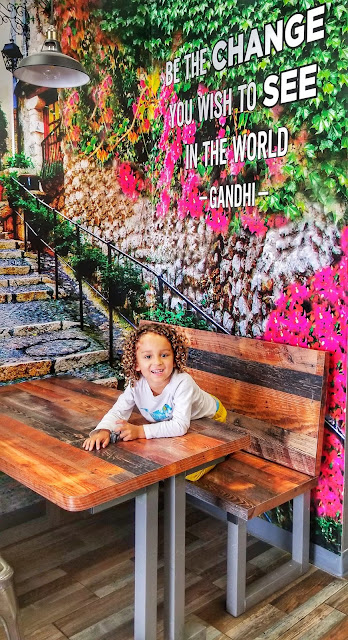 We ended up ordering a medium pizza, half barbecue "chicken", and half "cheese" (in case Phoenix didn't like the non-cheese toppings). We also ordered two corn dogs (thanks to my mom), a coke and dessert. After they brought the pizza to our table I realized there was a mistake on our order. Instead of half the pizza being just cheese, the entire pizza was the barbecue chicken and half had no cheese. But at that point it didn't matter because we had pizza evidence all over our fingers and all over our mouths and were both enjoying every bit of it! Next time we're in LA, we'll be back for some more fingerlicking goodness!

How to get there: