The Hospitalization- Day 3- The MRI 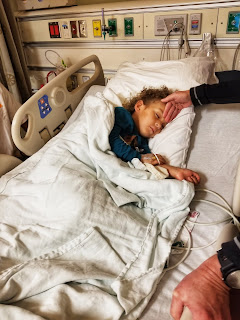 Day three came, and all the wires got removed from Phoenix' head, in preparation for the MRI. He was also instructed not to eat before the MRI. The time of the MRI was unknown. But they said they would try to get him in as soon as possible. He couldn't drink any liquids after a certain hour as well. So we had to make sure he was preoccupied, and keep his mind off of food and drinks.

He watched movies, and played in the kids play area a bit (this time with a backpack for his EEG equipment), but the best part was the dedicated space for music therapy for kids. Near noon Phoenix had exhausted all his resources, luckily music therapy was about to begin. When we got to the designated space space for music, Phoenix was too shy to walk in. But finally, I managed to bring him in and once he got going, nobody could stop him!

During this music session they had a musician that played songs for the kids as she sang along. There were various instruments laid out for children to join along and play music with the instructor. Phoenix was having a ball, and it was the happiest I saw him during the entire hospital visit. This truly was therapy for the kids and it made me so happy to see hospitalized kids "enjoying life" in there.

Once there, they briefed us on the entire process and in no time Phoenix was asleep and away. They said the process would take an hour to an hour and a half. Phoenix' dad and I patiently waited in the wait room. An hour and a half had gone by and time kept ticking, but nobody was coming to get us, as they told us they would. Our nerves started to kick in. Why was it taking so long?

Finally, somebody came and called out Phoenix' name. She told us that he was okay, and that for a reason I can no longer remember the procedure was taking a bit longer. She stated that they would come back and call us in soon. That was a sigh of relief! And not too long afterwards, we were with Phoenix, where he still lay sleeping in bed.

The nurse was waiting to see if he'd wake up, but she said that if he didn't wake up soon, they would have to wake him up, and take vitals and everything to make sure he was okay. Phoenix wanted to keep sleeping, so we gently started tugging him for wake-up. He finally opened his eyes, and I got to lay with him, and give him some love. Eveything was okay, and they transported us back to his room.

By the time we got back, it was around 5 pm! Phoenix had not had an ounce of food! So that was the first thing we requested. Soon he was in food bliss. Now it was a matter of waiting for the neurologist doctor to come and give us MRI results. 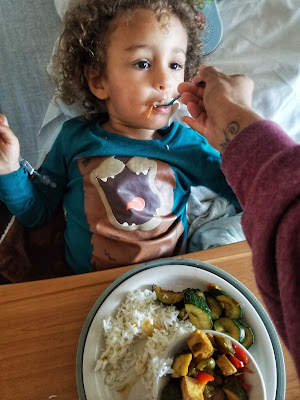 Labels: Everything in Between