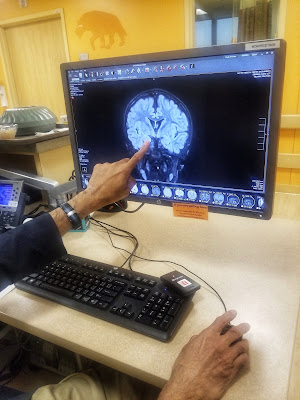 The doctor finally walked into the room and said that he still needed to go check the MRI report and images, but that there might be some significant results, and that he would be back shortly. In the meanwhile I contacted Phoenix' dad, who had just stepped out for a bit, and told him that the doctor had arrived and would soon go over MRI results. Not too long after that, the doctor walked back in and called me out of the room, while my mom stayed back with Phoenix. I was feeling nervous that I had been called out of the room.

We walked a short distance from the room, to one of the computers, and the doctor started showing me some of Phoenix' brain images. He said that the MRI report indicated a subtle elevation which he explained could be indicative of a tumor. He stated that the report also said that a mass was unlikely. It was a confusing report, and the doctor was very frustrated with the report impression.

During this time, Phoenix' dad arrived and we went over the report results again. The doctor repeated that the report indicated a subtle elevation, but when he showed us the brain images he said he really didn't see what the radiologist was seeing or stating. He explained to us that an elevation could mean a tumor, either resulting from seizures or causing the seizure, or it could indicate that neurons have died in his brain due to the seizures. He said because the results were inconclusive we would have to repeat the MRI in about 3 months and if the elevation is prominent, it could likely be a tumor.

He then told us we had the choice of staying at the hospital longer and doing a lumbar puncture, which is an invasive procedure. Then put Phoenix on antibiotics and wait for culture results. He then said that his observations were that Phoenix was a happy normal child that wants to play, and he didn't think it was absolutely necessary to stay and do all of that, but that it was up to us. We then decided we didn't want to go through with all of that.

He also emphasized the need for starting Phoenix on medication, and the word emphasized is an understatement. Because this was all so new and shocking to us, we told the doctor we needed some time to think about medication, and as a result we got a "royal beating" so to speak. The doctor was not happy. But he did prescribe  and send us off with emergency medication, in case Phoenix had a seizure that lasted over 3 minutes. Later that night, Phoenix was finally released.
Labels: Everything in Between