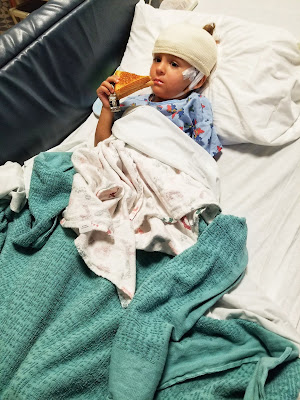 The next day came, and Phoenix' dad and I took turns being at the hospital with Phoenix. It was the last day to move everything out of the "old" apartment, clean it up, and move into a "new" apartment. Stressful it was! Luckily, we had family and friends helping out with everything, and great medical personnel checking in and making us feel as comfortable as we could get.

One of the really great aspects of Sutter's pediatric sector is that they have Child Life Specialists that work with families of kids who are hospitalized. So we had a couple of those specialists come to the room and interact with us all. They left Phoenix an enrichment box filled with supplies such as: color crayons, color sheets, scissors and other tools that would encourage his fine motor skill activities. It was comforting to know that there was designated staff there to help make kids feel like they are kids during hospitalization.

Then finally, towards the end of the day, his neurologist (who works at a different location) stepped in, and I was able to show him the video recording. As soon as he looked at it, he confirmed that it was a grand mal seizure. Then he left the room to review the EEG recordings, and surprise-- all of a sudden he noticed footprints of a seizure in the recordings, which for some reason had been missed before I showed him the video. He immediately ordered for an MRI to be done the next day, so that meant night two at the hospital.
Labels: Everything in Between