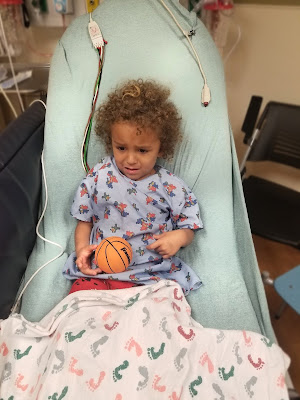 When we finally got to the emergency department, Phoenix' body was still weak, his left hand was still in sort of a paralyzed position, his upper body kept tilting over, and his movements were slow and tired. As we waited for doctors to come, hospital personnel provided him with toys, and also a movie to watch. Once a couple of doctors came in to the room, it took just one quick look at the video recording for them to determine that indeed Phoenix had a seizure. Then they advised that Phoenix be hospitalized until given further notice.


Soon we were transferred out of the emergency department and taken to the room where we would be staying the night. They told us they would be hooking him up to an EEG monitor for the remainder of our stay so that they could see if he was showing any unusual brain activity. That day, we had to wait for his neurologist doctor to arrive so that he could assess the situation. But that day was also the day I was supposed to be doing a walk-through and picking up a key at an apartment we were supposed to be moving in to. So when Phoenix' dad arrived at the hospital I left to go take care of that while he stayed back with Phoenix.

While I was gone, Phoenix' neurologist showed up, and I missed the opportunity of showing him the recording of Phoenix' seizure. With everything that was going on I spaced on sending it to Phoenix' dad so that he could show the neurologist. Anyhow, the neurologist advised that Phoenix stay overnight so that he could continue to be monitored on the EEG. So that was our first overnight stay. The night consisted of regular nurse visits throughout. But the most comforting part of our night was that I was able to sleep with Phoenix on his hospital bed.
Labels: Everything in Between