Beyond Excited about Meatless Monday! 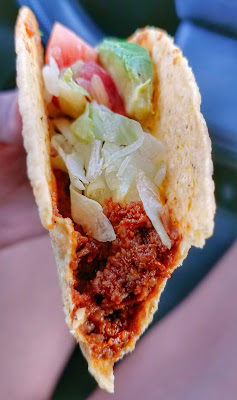 Did you know that California has the largest number of vegan restaurants in the United States?! The rise in the vegan and vegetarian population has increased the demand for plant based food. Consequently we see the restaurant industry trying to accommodate this demand. Up until this weekend, I always felt like the fast food industry lacked on the vegetarian spectrum of things, but there's one fast food chain that I believe is going to further revolutionize the entire fast food scene.


Just recently, one of my friends posted her Beyond Meat tacos from Del Taco on her Instagram story. As soon as I saw the post I was determined to give it a try. So this weekend, Phoenix and I went through the Del Taco drive-thru, and I ordered the Beyond Taco meal, and of course a bean and cheese burrito for Phoenix. The meal comes with 2 Beyond Meat tacos, a soda, and fries. They have two beyond taco options: the vegetarian version that comes with cheese, and the vegan version that comes without cheese, and has avocado instead. I asked for my meal to come with one each, which they were able to do.

I was beyond excited to have tried both! I chose the hard taco shell, but you have the choice to choose the soft taco option. Both tacos included lettuce, and tomatoes, and of course the meatless Beyond Meat. The Beyond meat was moist and had a nice "meaty" look and texture, as well as really good flavor. Both the vegetarian and vegan versions were finger licking delicious.

Phoenix doesn't typically like eating tacos and prefers to stick to burritos, but this time around he actually asked to try the tacos and when he took a bite he said, "Mmm...it's good!" If you are a vegetarian or a vegan you can relate to the beyond excitement of driving through a drive-thru and being able to order food that comes with "meat" that's meatless.  If you're a meat eater, I'd say you should give it a try! And to all other fast food chains, if you haven't already- get on board!