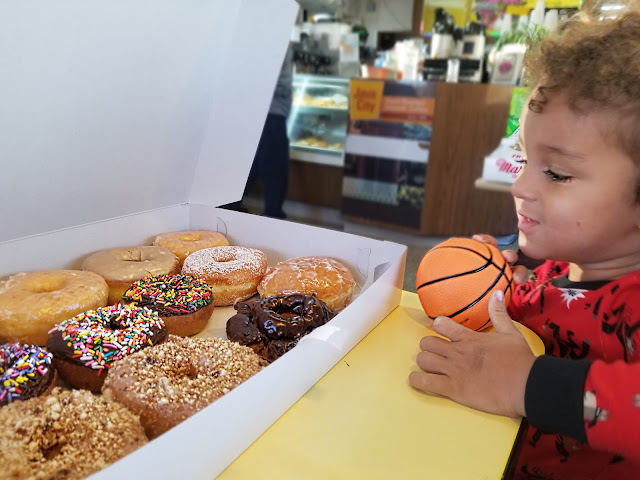 Phoenix' shake episodes continued to happen during his naptime or bedtime. When they happened, they always happened during the first ten minutes of sleep. They were happening sporadically, but as time went on, they slowly began to happen more frequently. Some of them were quick little shakes, and some seemed to last a bit longer.

One day he was in the car seat, and started shaking. I could always tell he was shaking because his breathing changed and would become louder. I remember calling his dad, crying, and saying, "It happened again. This is not no paranormal sleep! This is something else. Something is wrong!" Not too long after that it happened again. The shaking seemed to be getting stronger.

Then one morning, Phoenix woke up super early. We were both up, so I decided to take him to a doughnut shop--Bakers Donuts, on Florin Road. Off we went, pajamas and all! And though neither one of us got enough rest that night (Phoenix had recently started showing signs of insomnia.) I intended to turn our morning into a fun adventure!


We got to the doughnut shop, picked out our doughnuts, and milk. Then we sat at a table in a dough-nut disturb mode and enjoyed our doughnuts. Well, we enjoyed until Phoenix got irritated for I can't remember which reason and spilled some of his milk. But throwing things and getting irritated were a norm for Phoenix, so we cleaned up and moved on.

Before leaving the doughnut shop we grabbed something for his dad. I then texted him asking if we could meet him on his way to work to give him a special treat. We decided on an exit off the freeway to meet at, and we were on our way! Just as we were getting close to the exit, Phoenix fell asleep. I exited the freeway, and when I was at the stoplight, waiting to make a left hand turn, it happened.

Phoenix' breathing had changed. I turned around and sure enough he was shaking. Only this shake was a little different than the other ones I had seen. His eyes were open and looking upwards, his right eye was quickly blinking. His right fist was clenched tightly, while his other hand was hanging in a paralyzed position. His head was tilted to the right, and it seemed like the right side of his body was doing most of the shaking.

My body was turned towards him, and I touched him lightly and kept on saying, "It's okay, it's okay." At the same time I started to record so that doctors could see the recording. The light turned green, so I was recording, driving, and comforting all at the same time. As soon as I turned I went straight into the first parking lot.

When I looked at my phone, I realized I had recorded well over 3 minutes, plus the time I had not recorded, and he was still having a seizure! Only now, his eyes had moved downwards and his movement had slowed down, as if he was shutting down. I was getting frantic. I called his dad right away, and luckily he was right around the corner.

As soon as he arrived, he rushed to take him out of the car seat and carry him. It was well over 5 minutes and he was still having a seizure. I was frantic. We quickly agreed on calling emergency, and as soon as I got through, to them, Phoenix had just snapped out of it. We called off emergency.

Phoenix showed little to no movement. He was weak. He couldn't hold the right side of his body up, and he couldn't hold anything in his right hand. Without much hesitance, I was off to the hospital. What had just happened started to hit me harder on the way to there. I had sudden road rage, and I began to freak out a bit. But we got to the hospital safely, and now it was just a matter of waiting to see what the doctors would say.
Labels: Everything in Between