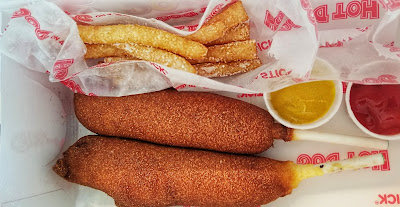 If the word veggie is in it, then it must be healthy right?! Well, not really, but we can pretend. I typically don't eat junk food or fried food, but on this day I was craving all sorts of fried. It was Phoenix' indoor playtime at the mall, and sometimes we get food from the food court, being that it's right next to the play area.

Phoenix normally requests "Panda" (Panda Express), and for me, it depends on my mood, and my mood was fried food. I blame it on the super snow moon, really-- there's no other logical explanation for my cravings that day. So Hot Dog on a Stick it was!

I was planning on one hot dog on a stick, but that day I got lured into getting a combo, so I ended up with "the box".  The box comes with two hot dogs on a stick of your choice, a small side, and their regular  hand stomped lemonade is offered  at 69 cents cheaper than usual with this deal. But I just ended up ordering a small lemonade, my two hot dog sticks which were both veggie sticks, and I got a small side of funnel cake sticks. I carried the box and lemonade to the Panda Express line, which was extraaaa long, and between Phoenix and I we devoured it all way before getting to order.

My verdict-- super fried and super good! Each hot dog is freshly dipped in their batter, so you're sure to get a hot, fresh, dog on a stick. The fact that they carry veggie dogs for vegetarians or for those who want to pretend they're eating healthier is awesome! Also, it's worth it getting a larger size of their hand stomped lemonade because it's super refreshing and delicious, and they have a few flavors to choose from. And what I like to call their "funnel fries' because they look like fries, are actually better than I thought they would be, or is it that the super snow moon was speaking? 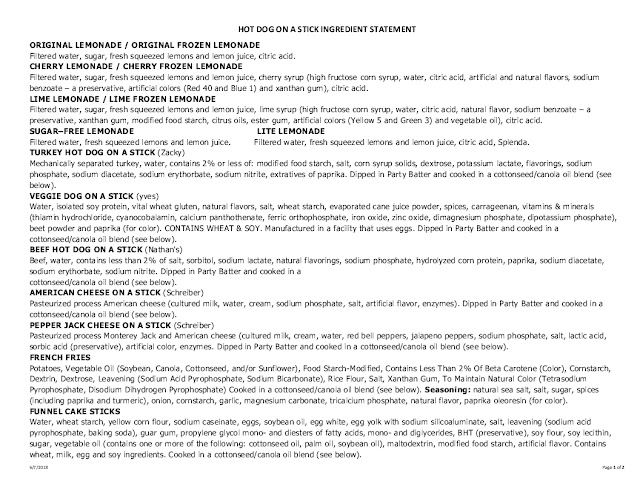