Why do so many people love a boiled egg for breakfast? It's so hard to beat! Phoenix and I definitely love our eggs for breakfast sometimes, and sometimes lunch or dinner. Though not always hard boiled, but I was egg-cited about starting off with an egg pun.

For the last three years I've been taking Phoenix to Glaum Egg Ranch nestled in Aptos, California. It's not where you go see chickens running around and laying their eggs (though that would be neat to see as well). But there is a large red barn! And though you don't get to see live chickens, you can see fake ones dispersed throughout the barn, including a few roosters. Also, they sell broken egg shells used as plant pots that foster little plants growing inside them. There's a variety of local goods being sold inside this barn that's used as a shop, such as: snacks, food items, "shit" seasonings (You'll have to go in to see what I'm talking about.), lotion, soap, bath bombs, magnets, and more. It's the perfect little gift shop inside of a barn.

But the shop is not all that brings us here every year, but rather the egg vending machine. Yes, egg vending machines do exist! But they are not too common. You might find one in the mountains of Japan, and if you're in California, more specifically, the Santa Cruz county, you are sure to find an egg vending machine at Glaum Egg Ranch in Aptos!

But really it's not just that it's an egg vending machine, you also get to see a chicken show for the $4 you put in. Yes, I said a chicken show! There's a window to the left side of the vending machine, and once your 18 eggs pop out, the curtain to the window rises, and you get to see a group of "chickens" singing in "chicken language." You know-- like, "bok-bok." But they don't just sing, they dance too! And they're always decked out in whatever the season calls for, and since Easter is right around the corner, they were decked out in all things Easter. They also had a picture  in there, dedicated to their father- Mr. Glaum.

This is place is so unique, and definitely a must stop! I wish I could continually put $4 into a machine that spits out eggs, just to see that smile and laughter on Phoenix' face! Oh also, did I mention--you get farm fresh eggs!!! 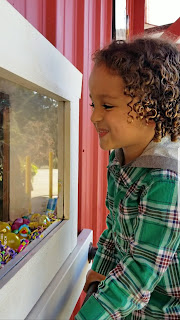