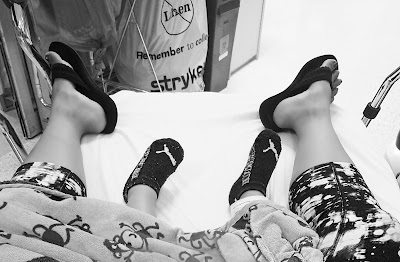 One day I got a phone call, and the phone conversation was calm and collected, and then he told me, " I think Phoenix just had a seizure" and all of a sudden broke down. Phoenix was about a year and six months old. It was like any other day, where we go about our normal every day business. That day, Phoenix was spending time with his dad, and they were driving "over the hill" on highway 17, towards San Jose to go shopping. I was in Santa Cruz at Phoenix' grandmas house when I got the phone call.

I was in shock, and asked what had happened and where they were. He said he was driving, and Phoenix was napping in his car seat, and when he looked back Phoenix' eyes had rolled back and he was intensely shaking for approximately three minutes.  He quickly pulled over, and got him out of the carseat and held him. When Phoenix snapped out of it, he said that he was weak and wasn't able to walk. They were headed to Good Samaritan Hospital in San Jose, and so Phoenix' grandma and I headed out that direction right away.


When we got to the hospital, Phoenix was waiting to be seen. They ran a couple of tests such as bloodwork, and a CAT scan and found nothing. He had no fever prior to  the seizure and wasn't sick, so a febrile seizure was immediately ruled out. They told us that not too much is known about seizures, but that some kids will have it once in their life and then will never have it again. They said hopefully that's the case with Phoenix, but to follow up with a neurologist.


You bet I was making phone calls the week following his seizure! It was a long process, but he was finally referred to a neurology specialist, and seen. In the meanwhile, Phoenix had no recurring seizures. Once seen by a childhood neurologist, it was recommended that he do an electroencephalography known as an EEG.

An EEG records electrical activity of the brain, and can show where abnormal activity is coming from. This helps doctors give a better diagnosis of what's going on. So, I scheduled his EEG, and when his dad and I followed up for results, we were told that everything was fine, and that his EEG reading was normal. So we left feeling peace of mind.

A few months down the line, Phoenix started having regular "shake episodes" during his sleep. I didn't know whether or not they were actual seizures so I called them shake episodes. Again, I scheduled an appointment with his pediatric, and when I explained it to her, she said it sounded like night tremors, and to make sure to record it the next time so that she could see. So the next time Phoenix had a shake episode, I recorded it, and then scheduled a doctors appointment again. Once seen, I showed his pediatric doctor the video, she confirmed that it looked like night tremors but that she would refer me to his neurologist again just to make sure.

Once again, we visited the neurology office for an EEG, only this time the EEG took place at their office versus San Juan Medical Center.  They placed electrodes all over Phoenix' head. The procedure lasted about an hour long. The next several days, his dad and I anxiously waited for his follow-up appointment, to hear results. When we went in for the appointment, the neurologist told us his reading was normal, but since he had been having his shake episodes during nap or sleep, she would recommend an ambulatory EEG just to put our hearts at ease.

An ambulatory EEG, is like the EEGs he already had, except that they put equipment on in the doctors office, and then you take the equipment home with you and it records  brain activity during the day, nap, and sleep. Then you go back to the office the next day to get it taken off. Then they look over the readings that were recorded, and give you results.

So we did the ambulatory EEG. That was a challenge, because you practically want to stay up all night and make sure that none of the electrodes come off the head. That meant Phoenix needed to be watched during his sleep. Phoenix' dad was there to help, making the process a lot easier.

I will never forget, however, coming home from the doctors office with Phoenix, and how he had such a hard time getting out of my car. I speculate it's because he had all the equipment on his head, and a backpack holding equipment, strapped to him. He didn't want to walk across the parking lot, and when we walked inside the apartment, he threw himself on the ground and started crying. All I could do was comfort him.

The next morning it was all over! Finally relief! No equipment. No worries (or was there no worries?). Freedom. Now it was a matter of waiting for results once again. Once again, we got results, only this time the results were read by a different neurologist, because our original neurologist had gone on maternity leave. He told us the readings were normal. Then he looked at one of the videos I recorded of Phoenix' shake episodes, and he said he suspected that Phoenix had paranormal sleep.

So once again, we left the doctors office with normal result readings. But there were doubts. Were the EEGs not showing what was really going on with Phoenix? Did Phoenix really have paranormal sleep?
Labels: Everything in Between