Uno mas is what I should have had! But of which?! The taco, the bowl, or the horchata cold brew?? All three were un the forefront!

On Tuesday, Phoenix and I stopped by at the new Mas Taco Bar location at Arden town, for lunch. I had once been to the Mas Taco Bar in the midtown area, with a friend during the summer, but never at this location, which recently opened (and is close to home), and never with Phoenix. When we walked in, we were told we could sit wherever we wanted. Phoenix chose right away, an "L" shaped booth right by the front door!

Once we sat, we looked at our menus, and our server came right away (exceptional service). I then ordered the roasted cauliflower bowl for Phoenix and I to share, and added the black bean stew to it. I also ordered the butternut squash taco, and the horchata cold brew.

As we waited for our order to come out, Phoenix was rocking out, dancing to the music that was playing in the background, and kept saying, "dance mommas, dance mommas." After a little bit of wiggling around with him, I glanced around. The bar area was in our view, and between the lamps, and the bottles- the colors looked so pretty and inviting. They also had what looked like an outdoor area that was covered (a good idea for the rainy weather). Also, I really liked that the seating areas were not all uniform, rather diverse, from booths, to chairs to stools, and every little area had it's own charm. But before I knew it, I had to switch my attention to the food that was put in front of us. 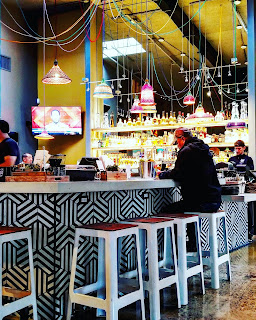 I served Phoenix brown rice and beans from the roasted cauliflower bowl, and I dug into the taco, or more like the other way around. The taco had butternut squash, braised swiss chard, and pepito salsa verde. The squash brought a nice sweetness to the taco, and the chard brought a nice balance to that sweetness. I did add salt to my dishes (as I mostly always do), but the taco had a perfect balance in flavors. Meanwhile, Phoenix was also enjoying his brown rice and beans.

Speaking of beans, I was really glad I added those to my bowl! It gave the bowl the much needed protein, and made the bowl feel a little more filling. But the flavors! The flavors were de-lic-ousss, and not to mention healthy. Our bowl had brown rice,  the black beans I added, onions, peppers, cilantro, romesco sauce, and the main-- roasted cauliflower. Let's just sayyy-- next time Phoenix can have his own bowl!

Then there was the horchata cold brew. I had ordered it because it looked so pretty in a picture, and I didn't even bother to realize the ingredients it had in it! When I took my first sip, I knew what I had gotten myself into. No, it wasn't a cold brew beer! It was a cold brew coffee. I had gotten myself into caffeine, on a Tuesday afternoon, which probably meant, no sleep for me! My body is not accustomed to caffeine, so I always start to feel a little weird after the fact. But this cold brew horchata was delicious! So like my family would say, "Adentro el pollo!" And nothing beats getting to pour your creamy horchata into a cold brew glass, rimmed with brown sugar. There's some unexplainable satisfaction that comes with that.

So back to my beginning question, if I were to have uno mas, out of those three, which one would it be?! The one that would help me survive, if I had to survive off of one. The Roasted Cauliflower Bowl, of course! Just add beans and you're set for life! Mas Taco Bar, "We'll be back for uno mas!"

1. Mas Taco Bar has two locations, and one opening soon at Palladio in Folsom.
2.  Hours of operation are: