The Do's and Dont's at Fredrick Miller Regional Park 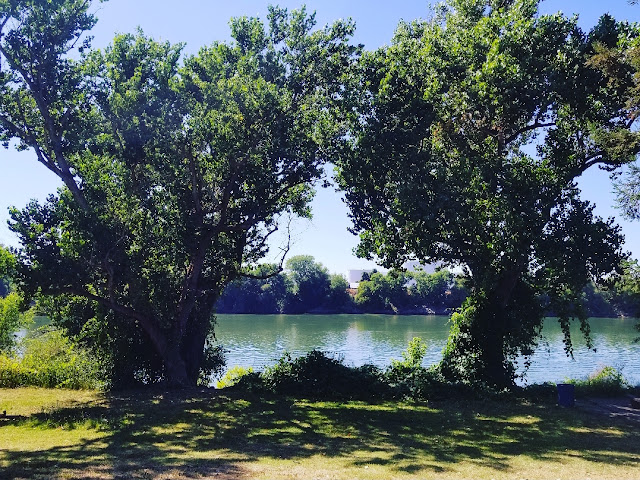 Do visit and enjoy the beauty of nature, but don't walk barefoot on the rocks and split your toe open. That's what happened to Phoenix not too long ago when we visited Fredrick Miller Regional Park.

When at the park, do look at geese, but don't chase the poor things. Phoenix had just woken up from a car nap, and we were in the area, so I decided to stop by. I had been here in the past to jet ski on the Sacramento River water, but Phoenix had never been. As soon as he got out of the car, he wanted to go "see" the geese that were roaming around the park grounds. I sat on one of the nearby picnic tables and watched him as he tried to chase geese, which I have to continually remind him not to do. But his fun of "looking" at geese was soon over, as soon as the geese decided it was a safer bet to cross the street.

Do sit on a large cement block and look down and enjoy the river views, but don't fall off! Luckily, neither one of us fell. We spotted the large cement block, and we decided to sit on it and watch birds and jet skis go by. It was one of my favorite moments at the park, though I did not like the fact that people leave their litter laying around, consequently dampening the beauty of nature. 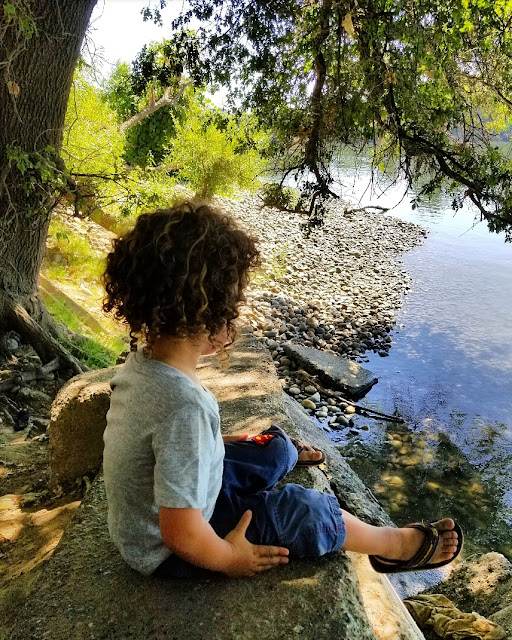 If you do fish on the riverbank, don't litter and leave fishing line and or fish hooks lying around. After a bit of observation time on the cement block, we continued our climb down the riverbank. Once at the bottom we sat on a cement piece once again, and observed our surroundings. Then Phoenix decided to get up and explore, as he always does. And that's when it happened. All of sudden he started crying and I saw blood gushing out of his pinky toe. As I grabbed him, I quickly  tried to assess what had cut his toe. And couldn't see anything near that rock, but I did notice fish lines lying around. It could have been a fish hook tucked in between the rocks, or a piece of glass. But there wasn't time to make a full assessment of probable cause, because I needed to carry him up and take care of his cut.

Do carry a first aid kit in your car, especially when you have a kid, and don't panic when blood keeps pouring out of your kids toe! I slacked on transferring our first aid kit to the car, and I was a bit panicky to say the least. When I got to the car I had nothing but wipes and water to clean up Phoenix' wound, but his cut was deep and he kept bleeding, so I felt I needed to take him to emergency. Right before getting into the car Phoenix started panicking because he saw blood that had dripped from his wound, down my leg while carrying him. He cried, "oh nooo..." as he looked at my leg probably thinking I had injured myself as well. I had to tell him that mommy didn't have an ouchie, and that it was the blood from his ouchie. Then we got in the car and off we drove to the emergency room.


When you get a cut, near a river that may be contaminated with bacteria, do see a doctor and get antibiotics, and don't slack on being up to date with a tetanus shot. Once we got to the hospital, the doctor told me Phoenix needed one more tetanus shot to be up to date. Because we didn't know exactly what had cut Phoenix' toe, it was better to be safe than sorry, so he got the shot. They cleaned his toe, and they glued the wound back together. He was prescribed antibiotics which he took for a few days. He definitely didn't feel well the next couple of days. He had a slight fever, and threw up, nonetheless, he recovered, and with a few lessons learned, we keep journeying.

How to get to Fredrick Miller Regional Park: