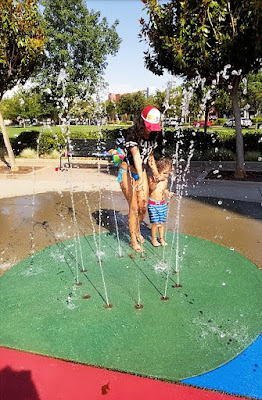 The school year is approaching, but summer is still here! There's still time for kids to get their spray on. There's multiple spray parks that are free and available to the public in the Sacramento region. If you have kids, they are sure to enjoy an hour or two of spray park adventures.

Phoenix and I found a spray park just a few blocks away from where we live, at the Village Green Park, in Rancho Cordova.  The park is located behind a shopping center, and in between a nice housing community.  The spray park hours are from 10am-7pm. There's no parking lot, so we parked alongside the park, on the one way street.

This was the first spray park Phoenix had been to, and as soon as he discovered how much fun it was, he was possibly the most excited kid on earth.  He was running all over the place, and yelling in excitement. When we first got there, there was one lady and her granddaughter, and she kept telling her granddaughter what a happy kid Phoenix was. He truly was, but I did have to tell him to slow down his run after reading the rule of no running. 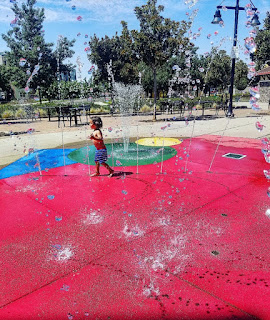 Soon more kids began to trickle in with their parents. Moms brought lawn chairs to sit around and socialize with each other. There were snacks, toys, bathing suits, and towels. Mostly everything you'd bring to a pool. The water was the perfect temperature, not too cold, and inviting enough to splash through. It seems that the water timer was set to about five minutes. So after five minutes you need to place your hands over the reset sensor, and the water starts back up again. I thought this was a great way of economizing our water. Finally, after a couple of hours of frolicking through the water, Phoenix' energy began to dwindle, so it was time to go, but it wasn't the last time we'd be at a spray park.

We've repeated our spray park visit twice ever since our visit to Village Green Park. We revisited Village Green Park with Phoenix' little cousin and her mom.
Phoenix got hurt twice on this visit. Once because he ran into another kid, and knocked heads. He bled a bit from his mouth on that hit. On the second incident a small kid riding his bike around the spray park perimeter ran over his foot. We pretty much called it a day after the second injury. 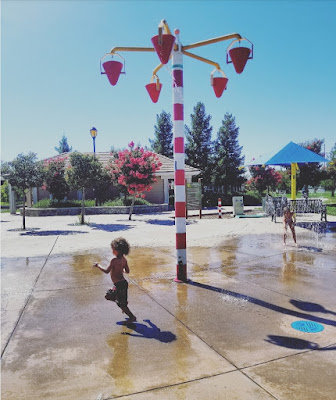 It also had water structures that children could manipulate, swivel, and turn to spray in various directions. 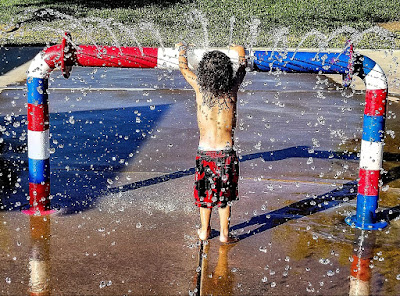 Phoenix did hit himself trying to manipulate one of the water structures, and I noticed another toddler did too. So, that's definitely something I would keep an eye out for at this spray park. Also, the water at this spray park was constantly running, and runs from 11am-7pm from June 15th through August 31st. Then from May 1st through June 14th, and from September 1st through September 30th it runs from 12pm-6pm. This spray park had a regular playground besides it which is definitely a plus.

Spray parks seem to be on the rise, and there's definitely more of them disbursed around the Sacramento region. They each have their pros and cons, and their own "personalities" if I may call it that. So if you're ever in this region, or if you live in apartments like we do, and want your kid(s) to have some fun in the sun for FREE, take them to one of these spray parks, and soak it all in! 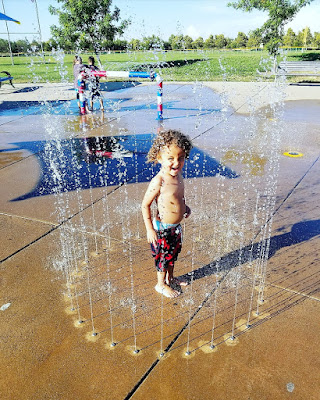 How to get to Village Green Park:

How to get to Bridgeway Lakes Community Park:
Labels: Everything in Between
Location: Village Green Park, 3141 Bridgeway Dr, Rancho Cordova, CA 95670, USA