With sidewalks lined in a beautiful array of colors from the flowers and trees, and the train mural luring us to the end of the street, it's no wonder why Weller Way is filled with unique charm. After our short visit to Sweets and Sugars (talked about in my Mangonada Monday blog post), we made our way back to where our car was parked, off of Freeport Blvd, on Weller Way.  I put a few things in the car, and as I looked down the short, dead end street I could see the trian mural "calling us" to walk on over. So I told Phoenix we were going on a short walk to see the choo choo train.

As we walked down the sidewalk I started to realize this wasn't just any ordinary street. It was a small street filled with character. Like the  rugged white truck that was parked by the sidewalk. It looked like it was used for work or maybe just hauling things, and it had a few stickers on it. One of them said, "Make love, not babies." The other said "Bernie 2016." I can't make out what the third one said, but what stood out most about this truck is what it had written on the back. In big lettering it said, "DUMP TRUMP, And The Elephant He Rode In On." I don't often come across trucks that have something like that written on the truck itself, so it definitely stuck out. We carried on walking down the beautifully lined sidewalk. 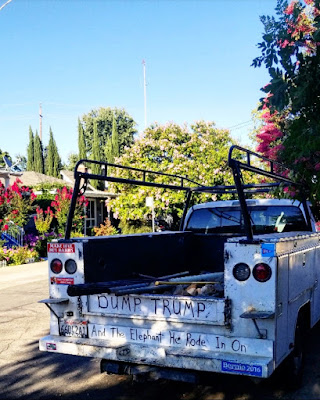 Then we ran into a house that had a sign that said, "Rosings Park" on it. 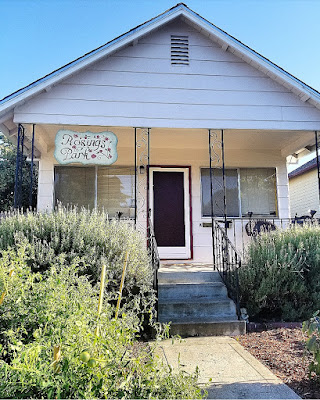 It was a small (like most houses on this street) white house with a peachy hue to it. And what was luring about this home is that it had toy tractors and excavators of different sizes placed all around the front yard. Of course, Phoenix loves tractors or anything of that sort, so he thought it was all there for his enjoyment. Not knowing how the owners would feel about somebody touching their toys, I told him they weren't ours and that we had to leave them in their place. I did, however, snap a few quick photos of him trying to play with an excavator. 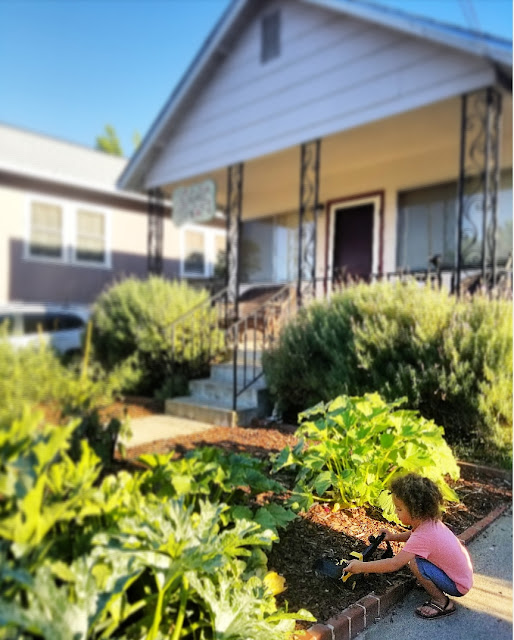 In front of this house there was also a little communal free library. 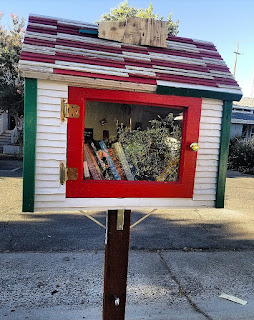 It had books like "Phantom of the Opera", and "Snow Falling on Cedars" as well as others it was filled with. The little library was painted red, white, and green, which made me think of the colors of the Mexican Flag, but really it could be any flag. The other side of the little free library had books painted on it. I thought this little free library was a really nice touch to the community, and it also made me think that the tractors were meant to be played with, but who knows. 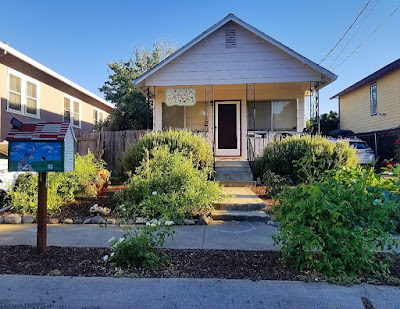 We continued on to the dead end destination that had lured us in the first place. When we got there, we could hear a train passing by in back of the brick wall mural. I'm guessing this might be why there's a train mural here in the first place. Phoenix got some time to explore the mural before heading on back to the car. 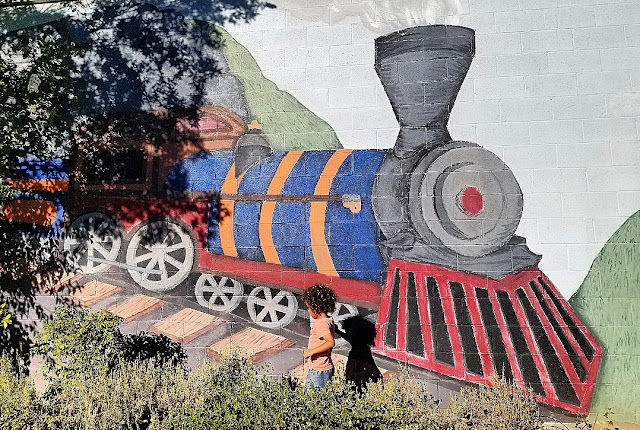 On our way back, I didn't think to cross to the other side of the street, so it's possible we might have missed some Weller Way charm, but there's always next time! Though the homes were not huge and extravagant, there was something about this street that gave it it's charm. Maybe it was the natural beauty of trees and flowers that lined the sidewalk, maybe it was the truck with anti Donald Trump verbage, maybe it was the toy trucks, the small community library, or the train mural wall at the end of the street, or maybe it was all of it combined. Find out for yourself! If you visit Sugars and Sweets, you can work off the sugar or the hot flaming cheetos with nacho cheese by taking a stroll down Weller Way, and determining what makes it charming to you!

Labels: Everything in Between
Location: Weller Way, Sacramento, CA 95818, USA