"No one cares about your protein intake until they find out you're vegan." This quote, amongst many others, was used to create a vegan themed afternoon lunch for my sister, who is a vegan newbie. I worked on bits and pieces of it all, on separate days, a week before our vegan lunch celebration. To start, I googled various vegan quotes, and some funny anti-vegan ones, and screen shot them on my phone. Then I cropped all my screen shots. I did this all while Phoenix napped. 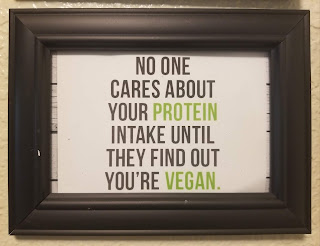 The next step was to go to Fed Ex (we don't have a printer at home), and print all my screenshots out. There was a bit of trial and error at Fed Ex, such as printing some from the copy machine, then realizing I didn't want each quote to be an 8.5×10. I spent about $6 on those copies and ended up using only two of those copies. Then I tried their photo printing machine, and ended up printing most of my quotes and such on a 4×5 size. I say most because some of the photos didn't fit into the 4×5 size, and that was the largest I wanted the pictures to be. I spent about another $6 at the photo machine, and those $6 were well spent. All the while, Phoenix was seated playing with his cars and eating a cracker snack, waiting for me to finish patiently.

The next step was to frame the pictures I had printed, so we headed off to the Dollar Tree to keep this project inexpensive. We spent about 15-20 minutes in the frame section, and Phoenix was super anxious to get to the toy section. I got sixteen 4×6 frames, of which I used 15. And then I got two 8.5×10 frames, and two 8.5×10 clear picture stands, and I only ended up using the two clear stands. I plan on returning the three frames I didn't use, and possibly saving those $3. I spent a total of $20 plus tax on twenty frames, and one extra dollar on a set of three cars for Phoenix, so we both left the Dollar Tree happy.

Now that I had all the frames and pictures it was time to decide which picture would go in which frame. That I did while Phoenix napped (which is when I try to get lots of things done).  I did have to modify a few things, as in trim the pictures a bit or move them in a particular way so that the wording in pictures would actually show. One picture I actually ended up taping to the outside of the frame, (tape unseen of course). This part of the project took me two separate time frames because Phoenix woke up from his nap the first time. But it was my favorite part of this project because I felt like I could see the results coming together.

The second to last part of this project was laying all the frames out and deciding how they would be arranged on the wall. Phoenix got to watch one of his favorites, Mickey Mouse Clubhouse, while I worked on this part. I laid them out on the dining room table, and probably rearranged them several times before I thought I had finally decided the pattern I wanted to see on the wall. I was stressing out a bit for this part because it was the day of the vegan lunch and I was already at a time crunch for things to do. So, it was time to get it all on the wall! 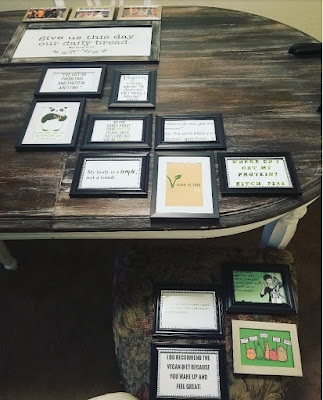 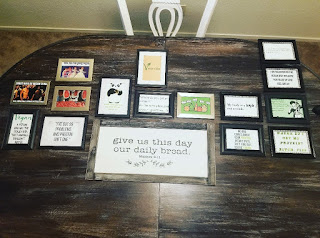 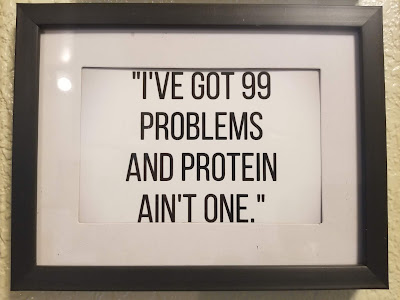 "I've got 99 problems and protein ain't one." This was one of the quotes going up on the wall, and hanging these frames on the wall was one of my problems. Mostly because I was in a huge hurry to get the job done, and move on to the next step of my vegan lunch, which was the cooking step, but also because alot of trial and error took place, as far as making sure the frames were level (there were multiple holes in the wall for one single frame). Also, the frames were on the cheaper end, so it was hard keeping them flush to the wall. If you recreate this project, you may want to buy some reinforcements from a craft store. I also ended up with a completely different wall arrangement, from the one I thought I had decided on, and it just sort of happened. Phoenix wanted to help me hammer, so I gave him his play hammer so that he could "help". Finally I was done, and was ready to move on the actual food piece of my vegan lunch.

It was time to cook! I wanted a ball park type lunch, so I decided my main part of the meal would be homemade vegan burgers, and the rest would be just sides. I found a vegan burger recipe online at

http://www.myrecipes.com/recipe/best-beefy-vegan-burgers, and decided to use that. Phoenix helped with the burger making process by blending the portabella mushrooms, with vegan butter. He absolutely loves helping with the blender.


Finally everything was done, and we got to our Vegan Summer Lunch (almost dinner), and the homemade burgers were seriously, the "best beefy vegan burgers". They looked charred on the outside, and the inside was tender and really looked like meat! The taste was fabulous, and everyone eating was pleased. My sister loved it all! I definitely recommend using this recipe, and in the future I will tweak this recipe to make it my own!


Steps Outlined for $25 Wall Collage:
*Note- "Give us this day our daily bread" frame is not included in this budget.